Founded in London in 1995 as a private members’ club for people in the creative industries, much talked about Soho House & Co has since opened ultra-hip clubs across Europe and North America, as well as well-reputed restaurants, workspaces, spas, bedrooms and cinemas. 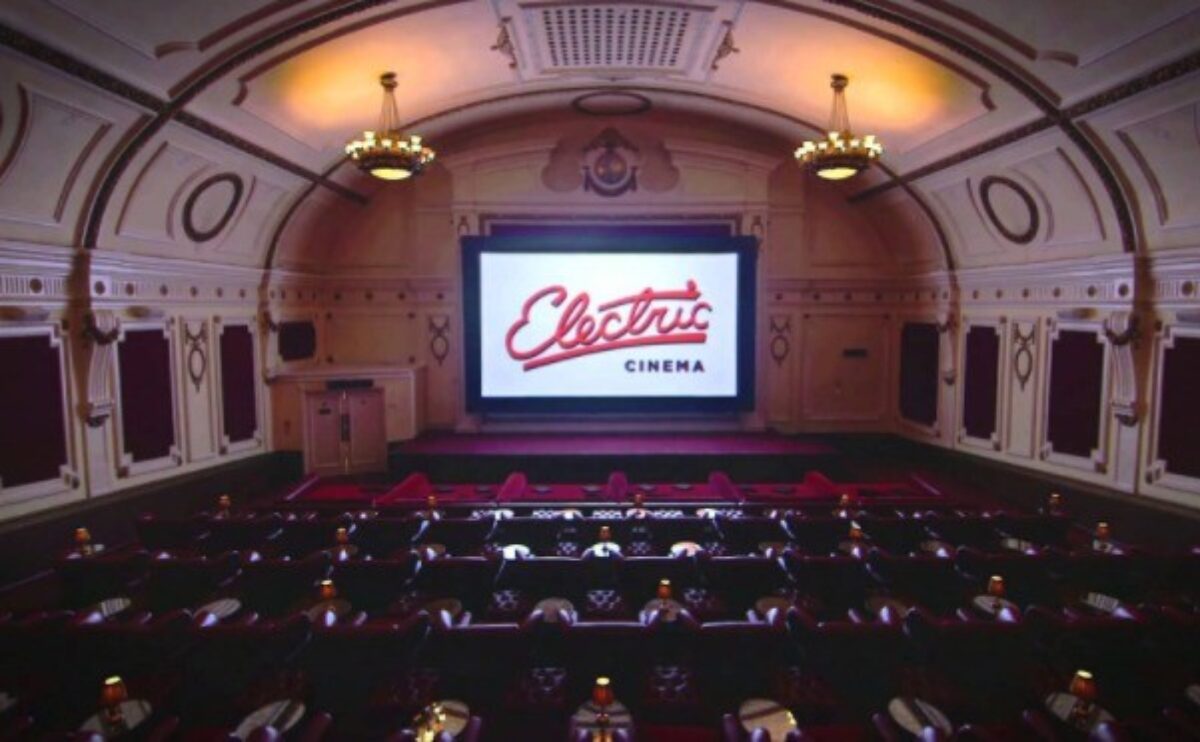 Part of the Soho House cinema chain, the Electric Cinema Portobello is the oldest working cinema in London. First opening as a cinema on 24 February 1910, it was one of the first buildings in Britain to be designed specifically for motion picture exhibition, built shortly after its namesake, the Electric Cinema in Birmingham.

Having survived a bomb attack in World War I, the building was named the Imperial Playhouse cinema in 1932, but the venue was soon eclipsed by the huge picture palaces that became fashionable during the 1930s. Following a name change in the 60’s, the cinema opened and closed several times without finding commercial success, before finally closing in 1993 for around five years with the building starting to fall into disrepair.

It wasn’t until the late 90s that the property developer European Estates acquired the Grade II* Listed Building and four years of planning followed. The site was significantly expanded through the acquisition of the shop next door which provided space for much needed upgraded bathroom facilities, an air conditioning plant and a restaurant. Soho House & Co opened the new and improved venue in 2001.

The cinema proved to be such a success that it wasn’t long before Soho House & Co acquired another site called Electric Cinema Shoreditch (formerly The Aubin Cinema), which opened on Friday 31 October 2014 after undergoing major refurbishment.

The interior of the Electric Cinema Portobello reflects the cinema’s long history – sixty-five leather armchairs with footstools and side tables offer unparalleled comfort. In addition, there are three 2-seater sofas at the rear of the theatre and even six double beds in the front row complete with cashmere blankets, providing a luxurious and totally unique cinema experience. Designed in a similar style, the newer sister venue in Shoreditch offers space for fifty cinema-goers and also boasts a hair and beauty parlour, as well as a fully-licensed deli bar and coffee station.

The main focal point at the Portobello site is a huge vintage chandelier which hangs beautifully within the main auditorium. Penny Hydraulics, having been selected as the lifting equipment partner on other projects throughout the Soho House chain previously, were contacted to specify a winch system to mechanically lift and lower the chandelier, so that it could be quickly and easily accessed at regular intervals for cleaning, to have the bulbs changed, or for routine maintenance.

“Gaining access to chandeliers in many large prestigious buildings can be a major issue,” said General Manager of Penny Hydraulics Lighting Winch Division, Ed Penny. “In old buildings in particular, the ceilings are often very high, meaning its necessary to hire in specialist lifting equipment to gain access to the luminaire.”

Hiring specialist access equipment required for work at height is not always straightforward, particularly in high demand areas such as central London.

“Due to intense demand, it’s not always possible to hire the access equipment you need at short notice.” Said Ed.

The demand factor for specialist equipment clearly highlights the requirement for property managers to plan well ahead, making sure that the necessary equipment for any work to a luminaire is booked well in advance, but this may not always be the answer.

“It’s all very well for property managers to be organised, but it’s not always possible to plan ahead if there happens to be a fault with the luminaire – it needs fixing fast,” said Ed. “The luminaire needs to be operational and waiting a week for a mobile elevated work platform (MEWP) just isn’t an option for most venues.”

In addition to supply and demand challenges surrounding access equipment there are further challenges to consider when planning work to a chandelier.

“The rental costs of MEWPs mustn’t be overlooked,” said Ed. “In central London, I’ve seen MEWP rental charges from hundreds, to thousands of pounds for the bigger units – shelling out this amount every time the luminaire needs to be cleaned, or needs a bulb changing simply isn’t cost effective & justifiable for most businesses.”

What’s more, specialist access equipment doesn’t solve the access issue for some large venues. Introducing further challenges still surrounding access to chandeliers, venues such as theatres and concert halls often have fixed seating directly underneath the luminaire making access impossible, even with a MEWP, unless the fixed seating is removed. This was the precise case at the Electric Cinema.

Penny Hydraulics design, manufacture, install and service raising and lowering systems – specialist lighting winch systems that address the access issues surrounding luminaires suspended at a high level, thereby allowing maintenance from ground level. It was this exact type of system that was specified for Electric Cinema who benefited from a fully-comprehensive service, all managed from Penny’s purpose-built UK facility.

“We offer manual, electric, remote controlled, interior and exterior winching systems,” said Ed. “Our complete design package means that we work closely with architects and structural engineers through the commissioning, manufacture, installation and maintenance stages of a project.”

Following a free of charge and no-obligation site survey, Penny’s specialist engineers specified one of their popular twin rope chandelier winch systems for the cinema.

The system comprises of cable reels, pulleys and the lighting winch itself. The system is operated by a motorised winch and pulleys are supplied to carry the wire rope along the desired rope runs. One man sited at the winch position can easily and quickly lower the chandelier for cleaning and maintenance without the need for ladders or scaffolding. What’s more, none of the working elements of the system are visible within the room – instead everything is neatly hidden away within the roof void as to not tamper with the aesthetics of the room.

The chandelier lighting winch system complies with best practice guidelines by eliminating the need to work from height and ensuring that the suspended load has two means of support. The system, which was installed in August 2017, is tested and certificated to Lifting Operations and Lifting Equipment Regulations 1998 (LOLER), ensuring it is fit for purpose and safe to operate.

The system will ensure that the chandelier can be quickly and easily be lowered for maintenance whenever required, without any need for costly access equipment and with minimal disruption at the venue – fundamental given the location of the chandelier.

“The Electric Cinema project shows perfectly how the unique capabilities of our systems offer so many benefits – it’s an absolute given that the system will save Electric Cinema time and money and help ensure the smooth running of their successful business. We look forward to completing further lifting projects for Soho House & Co in due course.” Said Ed.

Keen to see how a chandelier winch system works? Why not take a look at our animation?