Home | News | GlaxoSmithKline: Bespoke lifting from Penny’s for ground-breaking ‘Factory in a box’

GlaxoSmithKline: Bespoke lifting from Penny’s for ground-breaking ‘Factory in a box’

Penny Hydraulics has partnered with design and operations consultancy Bryden Wood on an ambitious and ground-breaking construction project for pharmaceutical giant GlaxoSmithKline which has resulted in estimated construction cost savings of 30% and a build time reduction of two months when compared to traditional building methods. 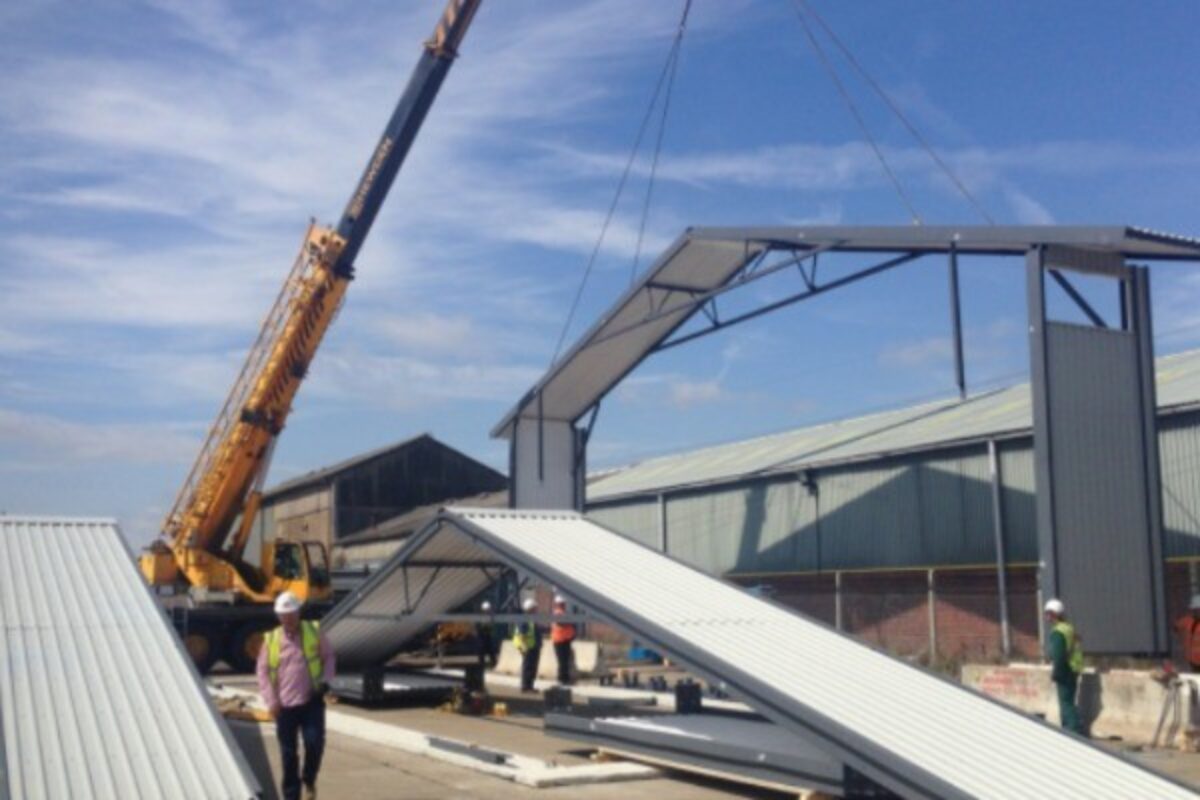 In an industry with stagnant productivity and well-known skills shortages, there’s a growing need to develop technologies that move away from labour-intensive brickwork and allow us to work quicker, smarter and more cost-effectively and never is this truer than in the developing world. How does a company like GlaxoSmithKline go into an emerging market and quickly build high-quality facilities with different levels of capability in different countries?

The ‘Factory in a Box’ system by Bryden Wood and GlaxoSmithKline centres around the idea of quick, safe site construction enabled by the use of composite components that can be shipped out of Europe or procured locally depending on the availability of local, capable construction infrastructure. 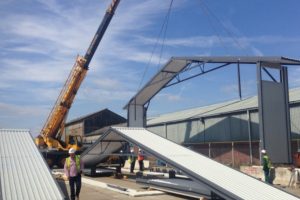 The project, which took place primarily to respond to GlaxoSmithKline’s need to develop factories and packaging facilities in Africa and Asia, involved a prototype building being produced as a demonstration of quality and compliance. Eight ex-Gurkhas unskilled in construction built a defect-free pharmaceuticals facility from components delivered in shipping containers! The whole facility arrived on site in boxes that contain every component packed in the reverse order needed for the re-assembly process.

In order to standardise and commodify the design and construction process, the project was broken down into ‘chips’ which are groups of related components, just like lego! The chips are based on standard functions such as; storage areas, clean rooms, blending chemicals or packaging and are connected in a specific order to create a functioning production facility.

Pre-engineered components are joined with uncomplex bolted connections and on site, the ‘builders’ follow a detailed method statement for each section of the build and are guided by an easy-to-follow system of coloured dots – fixing pink brackets to pink steels, or yellow to yellow. Wall and ceiling panels connect to a structural steel frame that is pre-engineered to include wiring and plumbing routes.

One of the main challenges of the project and the area that was thought to have the most associated risk, surrounded lifting a huge 25-tonne ceiling assembly from the ground. Numerous methods of lifting were trialled but in the end, following consultation with specialist engineers at Penny Hydraulics Ltd, an uncomplex mechanical block-and-tackle system was designed, specified and manufactured. The relatively simple system was preferred over other options which included hydraulic jacks attached to battery packs.

Having gone so well, the prototype is now set to be rolled out overseas and will therefore play a vital role in improving the accessibility of important pharmaceutical drugs in developing countries as well as creating new job opportunities too.

“Our challenge is to how can you build a kit factory that anyone can build,” says John Dyson, head of capital strategy and design at GSK. “The more you rely on trades, the more you rely on the quality in the country you’re building in, and that costs money. In particular it’s difficult for a company with very high compliance standards. So, it started with the hypothesis: if we can fit everything into a shipping container, we can send it anywhere in the world, to be built by anyone. I hope that Factory in a Box will be one of the generic systems that go towards revolutionising the construction process in the industry. It’s a reasonably small step from this to the health, education or residential sectors,” he says.

“We were absolutely delighted to be invited to contribute to this one of a kind project that has the potential to make such an important difference to the lives of so many,” said Penny’s General Manager, Ed Penny. “Lifting 25 tonnes is no mean feat! Especially when you consider that the lifting equipment has to be used by operatives with little to no training and the gear has to be transported thousands of miles in a relatively compact space – it was really important for us to not over complicate things and design a lifting system that was more robust or sophisticated than was necessary for the application and we’re really pleased with the result. The block-and-tackle system is of simple design, but it’s strong, reliable and is incredibly easy to use…it’s the ideal lifting solution for Factory in a Box.”

Penny Hydraulics handle bespoke lifting projects for some of the largest companies throughout the UK, including; BMW, Amey, Skanska, Sellafield, Royal Mail, VW, Boden, JD Wetherspoon & the Hilton Group and have lifting equipment housed at prestigious locations across the globe, including; Buckingham Palace, The Royal Albert Hall, The Royal Academy of Arts and Al Salam Palace. Customers with a bespoke lifting query should contact Penny Hydraulics headquarters in the UK.